To view the full video of Jim and McKinley’s Masterclass click here.

Over the last 10 years the direct sales industry has been massively impacted by social media. Companies and independent distributors have adjusted the way they use social media to grow their businesses. What began as a unique way to reach more people has become the main platform that most successful companies are using to create awareness about their company, their products, and their opportunity. 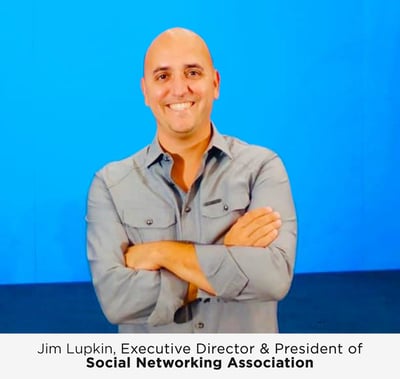 Jim Lupkin has been using social media within direct sales for over 25 years. You may be asking yourself how he was doing that if Facebook has only been around on a massive scale for just over 10 years. Social media can be defined as the ability to meet someone online, create a relationship, and then build some type of commerce from that relationship. What started in AOL message boards has transitioned to Facebook groups and direct contact with people around the world through Facebook Messenger and other social communication platforms.

Nearly 20 years ago, Jim Lupkin had a conversation with industry veteran and best-selling author Mark Yarnell around the topic of social media. Based on mentoring from Mark, Jim had enrolled 600 people over a two-year period (about 25 enrollments a month). All of this had been done by meeting people online, building relationships, and then enrolling them in the business.

This conversation happened well before the emergence of Facebook, Instagram and other popular social media networks that allow people to create and maintain relationships easier than ever before. Even at the time, Mark recognized the power that a social network could have on the direct sales industry.

Fast forward nearly 20 years and companies are doing exactly what Mark predicted. Huge direct sales companies have started and created massive momentum using social media as the main driver to connect with people. So, how are companies achieving this kind of success on social media? Jim Lupkin, who is the President of the Social Networking Association, has created a social media system that has been endorsed by the Six Sigma Organization. This system leans on four pillars—the “4-Cs” of Jim Lupkin’s system: Community, Conversation, Connection, and Communication.

A social community is a group of people who have connected to share their excitement for a company’s products or business opportunity. These groups are typically composed of existing customers or people who are thinking about becoming customers of a company. The same can be said for the business opportunity. These groups allow people to share their excitement and passion for the company or its products. These rabid fans can help others get excited by providing “social proof” around a company, its products, and its opportunity.

Tip #1: Have separate groups for customers and business builders. You shouldn’t be talking about the opportunity with someone who just wants to be a customer.

Over 1.4 billion people use Facebook groups each month. If you are committed to providing real value, Facebook groups provide a way to generate community for your distributors, customers, and their prospects.

Tip #2: The level of activity within your group has to be high. This includes posts, comments, and likes. This shows excitement as it relates to your products or your opportunity.

In the past, you would have to pick up the phone or meet with someone in person to have a conversation around your products or opportunity. Today, these conversations are happening on social media, most often through Facebook Messenger. There are over 3.14 billion people actively using the Facebook platform each month and the average person has nearly 500 friends on Facebook. It’s likely a distributor can reach out to 20% of those friends to have a conversation about the products or company. 80% of their friends will be in a state where they will need to build a relationship. So, how do you coach your field to have the right conversations to build the relationships? The end goal is to put them into the community. Using the 90-day principle can help set guidelines for these conversations.

The 90-day Principle: If you haven’t spoken to your Facebook friend in the past 90 days, you need to rebuild the relationship. This starts with reaching out to say hi. Re-establish the relationship and over time you can invite them to the community.

Sooner or later, every distributor runs out of people to talk to. In Jim Lupkin’s book: Never Run Out of People to Talk To, he teaches this valuable principle of connections. This tends to be the most exciting part of the system. Connecting with new people doesn’t happen effectively by buying a list or using a funnel. The social strategy that Jim Lupkin teaches is: Connections is about connecting with people you’d normally connect with if social media didn’t exist.

Finding a commonality with people is easy to do on Facebook. Connecting through groups or even with people who have checked in to your favorite Starbucks or have a mutual friend. These types of connections allow you to build a relationship quickly.

Years ago, Mark Yarnell bought a list of hang gliders. The list had their phone numbers and he called them to become friends and chat about hang gliding. The concept was that he was connecting with people he would be friends with if they met in real life. Mark built a career on connecting with people based on common ground. Doing so through social media makes it so much easier. Facebook is the easiest way to do this today.

The tendency of a person who just enrolled in a company is to go on Facebook and repeatedly “fire hose” their friends with their excitement for the company or its products. They get so excited that they post about it 10 times a day. And, they quickly lose any ability they had to from a real relationship with someone.

Tip: Teach your distributors to do a weekly update on their business. “I’m in week 1 of getting into the best shape of my life and I need people to cheer me on.” This is a great way to talk about the company’s products and commitment to health without blasting an advertisement for joining the business or purchasing products. These types of conversations should happen privately, through Facebook Messenger. When talking in private, you can bring up specifics of the business and the products.

Many new people don’t know what to say. Years ago, Verb created an auto-post social tool in the app to allow distributors to post content that the company had created. This removed the need to come up with the content. The problem was that Facebook saw these duplicated posts as spam and quickly put posters in “Facebook Jail,” or limited views of their posts. Our app team came up with a unique way to share on social media that allows people to have suggested content, create a unique message, and communicate easily on social. We have seen dozens of companies create successful sampling posts and promotional posts that have driven effective communication on social.

You can check out a short video on using the Verb app to communicate on social media here:

Common Social Media Pitfalls and Tips to Get Started

Jim shares some simple pitfalls to avoid on social and some tips to get started.

Tips to Get Started

Social media is a critical part of every direct sales company’s growth. How you build on social will have both negative and positive impacts on your business, so putting together a strategy and a system is critical to your success. I’m confident that the companies out there who embrace this strategy can maximize and grow like never before.

I’m a big fan of what Jim Lupkin is doing with his social media system. You can connect with Jim on social here: https://www.facebook.com/jimlupkin

You can also email him at: jimlupkin@gmail.com