From the very beginning, the Origami Owl Founders knew they wanted to do things differently. They decided the company culture was going to be their top priority. The executive team flew out to Zappo’s to take a look at what they were doing. The concept of “delivering happiness” that was part of Zappo’s core really stood out. Chrissy and team knew they wanted to make a difference in the world.

The Origami Owl Mission: Our mission is to be a Force for Good; to love, inspire + motivate people of all ages to reach their dreams and empower them to make a difference in the lives of others.

Nearly every employee and most of their Designers (what Origami Owl calls their independent distributors) can recite the Origami Owl mission from memory. They learned early on that when people are aligned with the mission, it shines through in every action. And, they have been extremely committed to keeping and protecting this culture.

Early on, people told Chrissy her team needed to follow the trends of what other direct sales companies do. When they hired industry veterans early on, there was sometimes a tug. They found that one bad apple could spoil the bunch. Now, they hire and fire based on the individual being a cultural fit. Being able to stand united in the mission makes it easier to overcome challenges. When everyone is committed to making a difference, it leads to success that also bleeds into the field. Being able to make those difficult decisions and stick to the mission and culture can lead to massive success and long-term growth.

Overcoming the Challenge of Cultural Impact During COVID

2020 and the challenges it brought had an impact on the direct sales industry. Everything from corporate events to distributor enrollments were affected by the pandemic. Finding the right way to keep your culture consistent is key to continuing growth and momentum in this new direct sales environment.

The direct sales industry was built on relationships, and oftentimes those relationships were fostered by in-person meetings and being able to make a connection in that way. Origami Owl has found a unique way to stay connected with their field and their customers. And the key part is that, like their mission, it isn’t a gimmick. They really care about their designers’ success.

“Our Designers are everything. Other than God and my family, I live and breathe their success.” – Chrissy Weems

Origami Owl found that addressing challenges head-on with the field has been critical in maintaining their culture. Sharing stories of top achievers is something most companies do. But Origami Owl is purposeful about not just promoting those with wild success. They share stories of people who are facing challenges and how to overcome them. At events, they meet their people with understanding. They let them know that it is okay to struggle and they provide the right tools for them to succeed. Through connectivity and emotion, they help tell stories that enable the field to stay connected and succeed.

The Push vs Pull Strategy

Relationships are important to Origami Owl. That includes having a strong relationship with their customers. They found early on that providing value to the customer creates a strong connection. They developed what I would call a push vs pull strategy. Rather than pushing information about the company, the founders and the product on their customers, they found that it was all about going to where they are and pulling them into Origami Owl based on their specific needs.

Origami Owl does this effectively on social media. The way they communicate with their customers is different from the typical strategy found in direct sales. Rather than having a communication platform that speaks only to their designers, they focus on communicating with customers. It’s all about the customer. Before most companies in the industry were creating a customer journey, Origami Owl had added it as a part of their core foundation.

Social Selling—It’s Not What You Think

From the very beginning, Origami Owl realized that their success would be built on social selling. And not in the generic sense that you may think, relating to social media. To Origami Owl, social selling means selling through relationships. It’s about social connection. It’s about storytelling. It’s about creating a relationship with your customers. Some of this has been done through social media and a lot of how the business is being done is through the Verb mobile app.

“The Verb technology has been life changing for us.” – Chrissy Weems 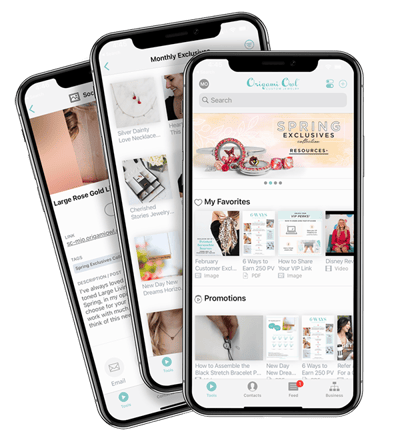 People are busy. Giving their designers the right tools right at their fingertips has been critical to their success. Providing promotions and shareable links in the app makes it so their designers have the tools they need on their smartphone. Origami Owl has long been committed to providing unique shareable content for their field to post on social media. Sending a push notification to the field and then helping them to effectively communicate has been key.

Origami Owl also has been committed to analyzing the data and being willing to adjust strategy when necessary. They take a hard look at the reports, they meet frequently with our Verb team, and they approach everything about the app strategically.

“The way Origami Owl approaches social sharing and maximizing the Verb technology is a 10. They understand it and they approach everything about it strategically.” – JJ Oswald, Sr. VP of Sales at Verb

Connecting with People is What Matters

For Origami Owl, it’s more than having the right team, implementing a strong culture, and providing the right tools to the field. In the end, it’s about connecting people with the moments that matter most in their life. It’s the power of telling a story. It’s the power of making a difference in the world, and what that difference can do has a ripple effect that extends further than the business. And, having this strong foundation has led to great success and a company legacy that is undeniable.