Mind Games (Part 2): How Understanding Confirmation Bias Can Save Your Bottom Line 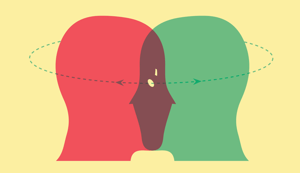 Confirmation bias is the reason why many business owners make decisions that go against the best interest of their business. Instead of being open to receiving a range of information and opinions, they stick to their game plan. They cherry-pick the available information that is consistent with their beliefs. As indicated earlier, confirmation bias exists within everyone and occurs at the subconscious level.

Confirmation bias occurs when we seek evidence that supports our pre-existing beliefs. In other words, we try to justify the beliefs that we hold while ignoring evidence to the contrary. We make decisions are based on our beliefs. Because of this, confirmation bias can reverberate through every level of the business. The following are some scenarios that illustrate this:

Business Case: A business owner micromanages his employees because he does not trust that they can do the quality of work that he can. He regularly intervenes when they are trying to do their jobs and dismisses their suggestions for how to improve the processes. The result is that both the owner and his employees are frustrated. Because the employees are unable to express their potential or creativity, they harbor resentment, and their morale is low.

Analysis: The business owner's lack of trust in letting his employees do their jobs is a result of financial loss in the past. He has developed the belief that while employees are necessary, their judgment cannot be trusted. This belief leads to micromanagement. The employees' reaction to his management style creates a perception in the owner's mind that they are ungrateful and are complainers. This perception reinforces his belief that his employees cannot be trusted.

Business Case: An entrepreneur starts a business and discovers that her sales are rising fast. Because of her success, she starts to borrow money so that she can scale her business, despite warnings from her colleagues. The following year, sales drop as consumers lose interest. She now owes more money than the business is worth.

Analysis: The entrepreneur's early business success results in her believing that there is a significant demand for her product. This belief leads her to dismiss her colleagues' advice. While her colleagues' advice may be generally correct, she believes her situation is unique, and so their advice does not apply to her. For this reason, she lets her beliefs guide her.

Business Case: An inventor develops a new product and creates a new business. The demand for his product results in sales that steadily increase. Despite the expressed concerns by his colleagues, he decides to expand his product line. He prefers inventing to running a business, so he creates new SKUs to increase sales. Though his original product continues to sell, his other SKUs do not. Despite this, he continues to push them in hopes that they will eventually sell, even though they are eating into his profit.

Analysis: As in the previous scenario, the inventor has developed the belief that his original product is a winner. Because of this, he believes by introducing new products that he will enjoy even greater success. Further, he decides to split his attention between running the business and inventing new products, which also compromises his business.

In each of these scenarios, confirmation bias is the driving force behind these business owner's decision making. Their focus was limited to the evidence that supported their beliefs.

In the first scenario, the business owner had the belief that his employees could not be trusted. He established evidence to support this belief in his employees' resentment and low morale. He was blind to how his insecurities had led to his employees to feel that way.

In the second scenario, the entrepreneur had the belief that her business was a success. She saw evidence of this in her early sales while dismissing the warnings from her colleagues. Instead of evaluating her sales over a period of time, she got caught up in her enthusiasm.

In the third scenario, the inventor's early success with his original product provided him with evidence that it was in high demand. This belief led him to believe that he would enjoy similar success with his other SKUs. He also found inventing to be more enjoyable than running his business. Because of this, he did not give running the business his undivided attention. Despite his colleagues' expressed concerns, he continued to carry the new product line, which ended up costing him money in the end.

In each of these scenarios, the business owner held erroneous beliefs. Their beliefs created their view of reality. Any information that did not align with that belief did not register in their minds. Again, it is essential to note that confirmation usually occurs at the subconscious level.

A Case of Mistaken Identity

The fact that business owners cling to the beliefs that are detrimental to their business may seem odd; however, it reflects our usual propensity. Most people identify strongly with their beliefs. In other words, we allow our beliefs to define who we are. When there is information that challenges our deeply held beliefs, it is perceived as a direct attack on how we see ourselves. Naturally, not everyone clings to their beliefs or ignores information that supports an opposing viewpoint. The level to which we are affected by confirmation bias is based on how attached we are to our beliefs.

The saying "We create our reality," is not just a metaphysical adage. Like "rose-colored" sunglasses, the beliefs that we hold color our world. Everything that we do in life is driven by the beliefs that we hold. Even in the business world, where the bottom line is the mantra, plenty of business owners fall victim to their personal confirmation bias. The result of doing so is reflected in their decision making and how they execute. They overlook the evidence that would help them make better decisions, in favor of the evidence that supports their pre-defined perspective.

In Part 3 of this series, we will share suggestions on how to overcome the effects of confirmation bias.