The State of the Gig Economy – Part II: The Present 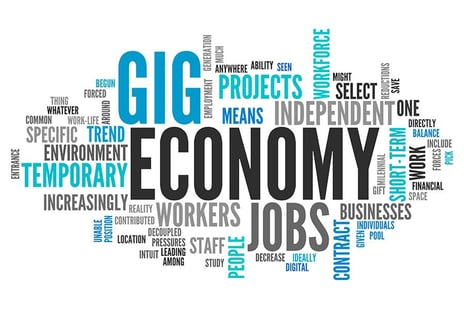 Welcome to the second part of our three-part series on the state of the gig economy. In our last post, we examined how the Gig Economy came to be. In this post we will look to the present day, and in our final post of this series, we will try to predict the future.

The gig economy has been going from strength to strength over the last five years or so, with 2018 and 2019 exhibiting seismic shifts in the way we work. As we head into the 2020s, it falls to us to evaluate the current state of the industry. The best way to make sure that you stay relevant in the future is to make sure that you’re relevant in the present and that you understand – and have learned from – the past.

The problem is further compounded by the fact that the majority of gig economy workers also have full-time jobs. Recent estimates suggest there are over 57 million freelancers currently at work in the United States, and this trend shows no sign of fading any time soon. Workers are happy with the arrangement too, with 80% of gig workers satisfied with their current job and 59% of them happy with their financial situation.

This brings us on to an important question -- Is working within the context of the Gig Economy a long-term and economically viable way of making a living?

Empirically it must be because millions of people are already using the gig economy as an alternative to traditional work. At the same time, it is too early to tell how sustainable a career in the gig economy will be in the long run. Some are worried that they will over-commit themselves too early and end up burned, especially with respect to the actual earning power a typical gig economy worker can expect.

The medium weekly income of US male gig economy workers is $653, which compares to $865 for full-time workers. Despite this, people are still clearly comfortable leveraging the gig economy as a primary or secondary income source, and surveys from LinkedIn and Intuit have helped to explain why, with findings including:

It is still early days for the gig economy, and the financial opportunities that it has to offer will likely continue to grow in the years to come.

Another interesting artifact of the gig economy is the rise of digital nomads, the term given to highly skilled freelancers and gig economy workers who make a living while on the road. Digital nomads travel the world indefinitely, augmenting their funds along the way with the same work that they would have done if they were at home.

This rise in the number of digital nomads has had real-world consequences. If you’re traveling through Chang Mai, Thailand or Mexico City, Mexico, do not be surprised to see co-working spaces and digital nomad spots popping up on every other corner. The growth of these real-world spaces does a great job of highlighting the true scale of digital nomadism.

Because digital nomads often find themselves traveling from time zone to time zone, it can be difficult for them to keep regular hours and for clients to know when they are working. For digital nomads, the traditional working day is dead, and in an international, Internet-connected marketplace, things keep moving 24/7/365. Digital nomads may actually have the edge over regular gig economy workers because they are more comfortable working unusual hours and accommodating clients from other cultures and distant locations.

Now that you know the state of the gig economy in 2019, it’s time to look ahead to the future and to plan ways that your company can take advantage of the new trends in the industry; this is what we will be addressing in the next, and final, post of this series.

Take notes on what you’ve learned and to spend some time with your team identifying skills gaps that could potentially be filled by a gig economy worker. In some cases, you can even save money by hiring a gig economy worker instead of a full-time employee.

Whether we’re talking about professional freelancers making a living from graphic design and web development or property owners making a little extra money from Airbnb, the gig economy provides an attractive and expanding option.

In the final installment of this series, we’ll be looking ahead to the future of the gig economy and seeing what the experts have to say in their predictions. We will also be sharing a few tips to help you to take advantage of the rapid growth of the gig economy.