The Evolution of Smartphones, Part 2

Consider this number: 3.5 billion—yep, that’s billion, with a b. Not only is it more than half the world’s population, but it’s also the number of smartphone users on Earth. That’s pretty astounding, especially when you consider that 30 years ago, the technology didn’t even exist. Now, it's hard to think of parts of the modern human experience that have been unchanged by having the world at our fingertips. Whether you use it to connect with potential prospects or just to share funny cat videos with your friends, there’s a reason the majority of Americans are never far from their phones.

As part of our Evolution of SaaS project, we’ve spent a lot of time looking at the past to understand how it’s shaping our present, and our future. A few months ago, we discussed the evolution of smartphones in this post, and our readers loved taking a look back at the social phenomenon. Since next year will mark the 15th anniversary of the first iPhone release, we decided that there’s, even more, to talk about when it comes to these innovative devices and how they’ve permanently changed the sales industry. Interested? Read on!

What Exactly Is a Smartphone?

For a deeper dive into the origins of the smartphone, check out part 1 of this series. Or if you’re strapped for time, here’s a brief definition from Wikipedia: “A portable device that combines mobile telephone and computing functions into one unit. They are distinguished from feature phones by their stronger hardware capabilities and extensive mobile operating systems, which facilitate wider software, internet (including web browsing over mobile broadband), and multimedia functionality (including music, video, cameras, and gaming), alongside core phone functions such as voice calls and text messaging.”

There was just a Nokia and a Palm Pilot. Much like the early cellphones seemed to exist solely for the elite, the first smartphones weren’t targeted at the average phone user. Originally intended to be a bridge between a PDA and a car phone, they were mostly developed for an enterprise audience. These dinosaurs were bulky, expensive, and honestly not that functional. And, extremely short battery lives and a lack of mobile network infrastructure meant those who could actually afford them weren’t usually that impressed. Like other flops, the technology behind them needed some time to mature before they could do the job they were designed for. Our modern devices are so far removed from their original counterparts, it’s almost like looking at a completely different invention.

We briefly talked about the invention of the iPhone in part 1, but its overwhelming popularity and pervasiveness in our culture urgead us to a more in-depth look. In 2007, tech magnate Steve Jobs donned his black turtleneck and walked onstage at an Apple keynote event to announce the product that would define a generation: the iPhone. Jobs originally cobbled the device together as a side project with a group of engineers who were hard at work on other things, realizing the potential of the concept. A large part of the initial appeal of the iPhone was its use of a touchscreen, which was a largely untapped technology at that time. His vision was of a computer in your pocket, controlled by a finger rather than a stylus, that would completely disrupt the phone and computer industries. And boy, did he realize it.

The iPhone was released in the United States on June 29, 2007, at the price of $499 for the 4 GB model and $599 for the 8 GB model, both requiring a 2-year contract, and stores began reporting stock shortages within moments of its release. Security guards were hired to protect merchandise and employees from the predicted stampedes, and thousands of people waited in long lines just for a chance to grab their own iPhones.

It was, to put it mildly, a huge success, and its successors continued to be introduced to great popularity and acclaim. From the iPhone 3G to the recently introduced iPhone 13 Pro, each subsequent version of that innovative piece of hardware has included upgrades that have changed the tech industry forever.

The Evolution of the iPhone

Our tiny pocket computers have come a long way since the early 2000s. Take a look at some of the most memorable features that Apple has introduced over the years:

Android As a Serious Competitor

Although it’s easy to view the iPhone as the smartphone front-runner, Android was in the market several years before the first iPhone hit store shelves. Android Inc was founded by Rich Miner, Nick Sears, Chris White, and Andy Rubin, and was originally meant to improve the operating systems of digital cameras--it wasn’t until the company was purchased by Google in 2005 that its current journey began. 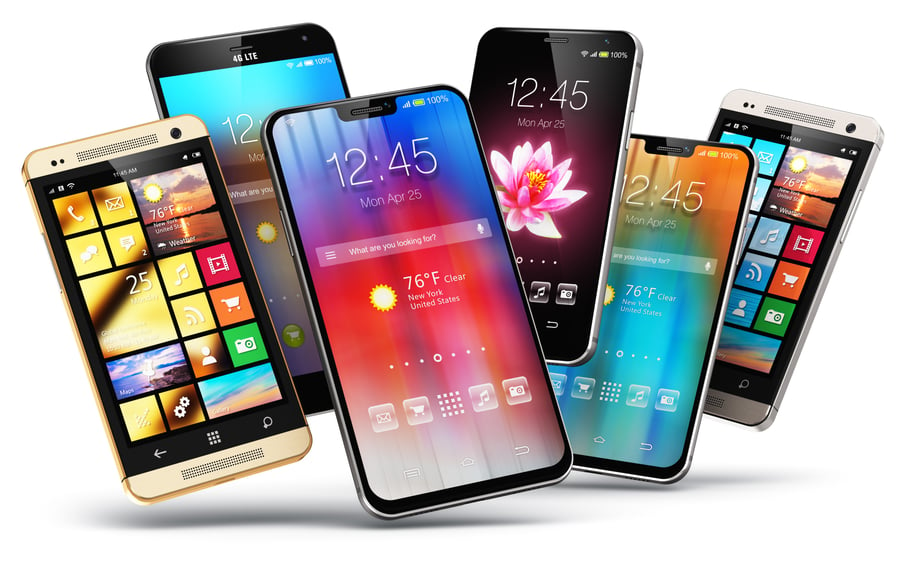 Android developers had been working on Android 1.0, its first official smartphone project, well before 2007, but Steve Jobs’s infamous announcement certainly played a role in speeding up the process. It was presented to the public not as the speculated “Google phone,” but as a “the powerful platform we’re unveiling will power thousands of different phone models.” Since then, smartphones running on Android’s sweets-monikered operating systems have held their own in terms of tech advances and specifications, maintaining an edge as a serious competitor to Apple. However, since the operating system is used by phones made by several manufacturers, it’s a little more difficult to completely track its evolution. Instead, here are just a few of the technological leaps that Android has taken over the years:

Whether you’re #Android4Life or prefer the Apple ecosystem, there’s no denying that the smartphone has forever changed the way we do business. Rather than being confined to a phone or an in-person meeting, salespeople can go through their entire funnel with just the use of their mobile devices. We consider ourselves to be a bit of an expert on this topic, as our suite of sales enablement solutions allows you to run your business from the palm of your hand. For instance, our mobile verbCRM app allows users to track the performance of your reps and ROI of each promotion in real-time, while also providing automatic sampling, follow-up opportunities, and more. 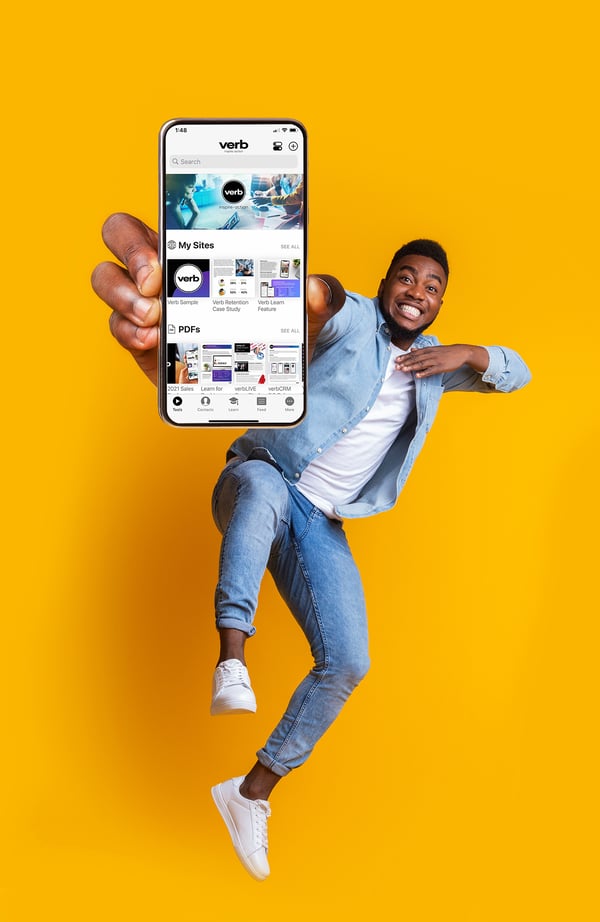 If you’ve got Verb and a smartphone, you can be a great salesperson. Here are just a few of the other many ways you can use our mobile sales enablement tools to set yourself up for success:

verbLEARN: Our mobile LMS is the ideal way to educate, train, and improve retention. You can use LEARN to create an effective sales training and employee onboarding process that gets your distributors up to speed quickly so they can start selling.

Contact Management: Keep track of your contacts and their progress on the go. Get a play-by-play of every sales engagement to provide actionable insights and drive sales. Empower your sales team with user-generated feedback to personalize conversations and time them accordingly.

verbLIVE: Create interactive livestreams in just a matter of seconds. Share interactive buttons so your audience can engage with you and purchase your products effortlessly right in your stream.

The Benefit of Personal Video

As a video-based company, we’d be remiss to not mention the incredible impact that the smartphone has had on personal video. Just 20 years ago, creating quality video content required a great deal of time, refined skills, and more money than most small businesses had access to. Now, that cinematic quality films can be made on an iPhone, it’s never been easier (or more important) for companies to utilize video in their sales and marketing efforts.

We’ve said it before, but video is powerful. According to HubSpot’s content trends research, 54 percent of consumers want video and 64% of them are more likely to make a purchase after watching branded social videos. And our tools take it a step further by incorporating interactive video, which allows you to inspire action while your customer’s interest level is at its very highest. It takes only minutes to film incredible video content on your smartphone and add clickable interactions—a game-changer for your sales content strategy! If you’re interested in learning more about best practices for personal video, check out this post. 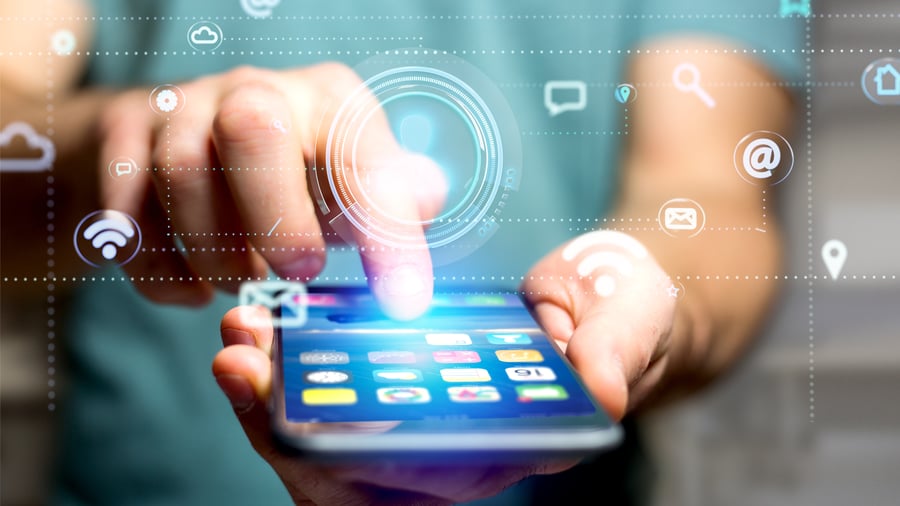 Where Do We Go from Here?

The nature of technology is that it is always changing, adapting to current trends and advances to better serve its users. So, what will smartphones look like in the future? Well, we don’t have a crystal ball, but based on our insights, we’d expect to see something like this:

The last 30 years have seen more technology development than most of us could have predicted, and now the rate of advancement is happening even faster than ever before. When we take a look back at where we’ve come in 30 years, it’s hard not to wonder what the next 30 will look like. And, even though we don’t know exactly what the future holds, we do know that Verb will be here—adapting, embracing new tech, and helping our users to maximize their success. If that’s the kind of future you see yourself in, reach out for a demo today. 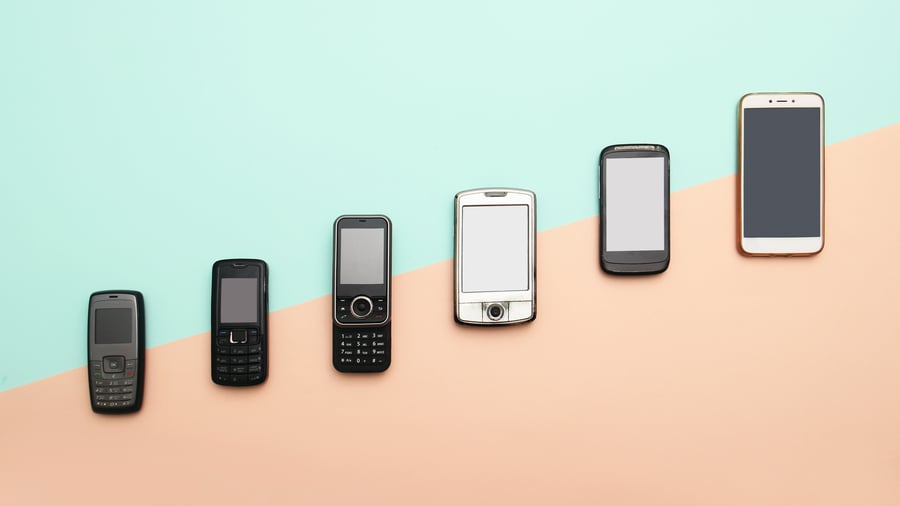 Wife, supermom, foodie, and talented critic, Heather Hanson, is a skilled veteran in copywriting, editing, creative writing, and social media outreach. She brings a lot to the table with Verb and has been recognized by our company as our National Treasure