Mind Games (Part 1): How Understanding Confirmation Bias Can Save Your Bottom Line 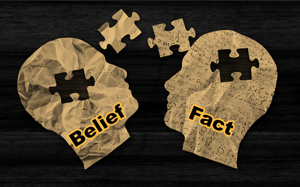 The Bureau of Labor Statistics states that 20% of small businesses fail in their first year, while 50% fail by their fifth year. The reasons for this high rate of failure is most commonly attributed to insufficient capital, improper management, inadequate business planning, and cash flow problems. However, from a deeper perspective, these reasons are more symptoms than causes. They do not address the root cause, which is faulty decision making.

How we make decisions affects every aspect of our lives. The purpose of this article is to draw attention to a natural phenomenon that exists within our mind, which, if not recognized, will ultimately lead to undesirable outcomes. No one is immune to this phenomenon, regardless of their intellectual capacity, level of education, race, or gender; it is part of being human. This phenomenon is referred to as confirmation bias.

Seeing the World As We Believe It

From an evolutionary standpoint, our brains were hardwired to pick up patterns. The ability to detect patterns is a survival mechanism. Every moment of our existence, information bombards us from the environment. It takes time to process that information before we can decide on how to respond. The problem is that, in a potential life and death situation, we do not have time to process all that information. For early humans, a delayed response would have meant becoming dinner for some predatory animal. In modern times, it could mean getting hit by a car while crossing the street.

The adage that it is "...important to make a good first impression" is based on confirmation bias. We formulate our beliefs about other people within the first seven seconds of meeting them. Once formulated, our beliefs are resistant to change. With confirmation bias, we only notice things about them that are consistent with our beliefs. Changing our beliefs of another requires that we receive new information that is significant or is consistent over time.

If my first impression of a person is that they are egotistical, I will be suspicious of them if they start being generous toward me. Later on, I may learn that this person is being honored for his or her efforts in community service. If this information is significant to me, I may change my beliefs about this person. Similarly, I may witness this person behave graciously consistently over a period of time. My original impressions of this person will be more open to change.

The Power of Belief

Beliefs are a form of thought of which we have invested our attention. In other words, our beliefs are thoughts of which we have a sense of certainty. Beliefs are compelling in shaping our lives. They determine what we focus on, what we overlook, what we are willing to do, and how we make decisions. Our beliefs create the meaning of our experience. It is for this reason that we see the world as we believe it to be. Our beliefs are the operating system of our lives. How we experience ourselves and the world is determined by the beliefs that we hold.

As previously stated, confirmation bias is the phenomenon where we find evidence to support what we believe. Just as our brains hold on to a song, our minds also hold on to our beliefs. Since our brains like patterns, we direct our attention toward information that is consistent with our beliefs. This phenomenon explains why some people will believe in something when there is evidence to the contrary.

Frequently, entrepreneurs make business decisions that go against sound business principles, even when they are made aware of them. Intoxicated with pride, enthusiasm, or ego, they stick to their decision. Their beliefs about their business or themselves make them receptive only to that information consistent with their established beliefs. These established beliefs become the "song in their heads."

Superior intelligence may be the hallmark of the human species; however, that same intelligence often overshadows mental forces. Our beliefs are such a force. Objectively, beliefs are neither good nor bad. It is more useful to ask ourselves if our beliefs are serving us and those who are impacted by them. By their very nature, beliefs are like a peephole in a door. They provide a highly restricted view of life. When we dismiss alternative viewpoints, we have succumbed to confirmation bias.