The State of the Gig Economy - Part I: A Global Revolution In Progress 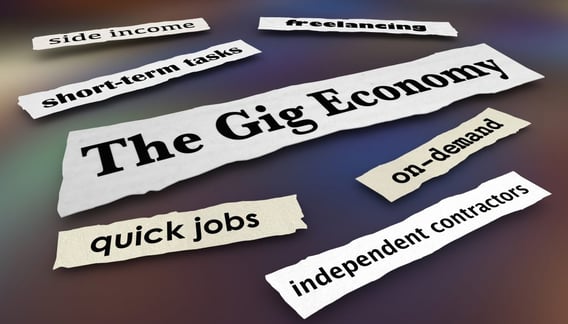 The gig economy is a global revolution in progress, and the concept of "work" is changing rapidly. What we once considered "jobs" are quickly morphing into a freelance-driven landscape with advantages and challenges for both employers and the workforce.

Can you imagine life without an Uber or Lyft to take you to a restaurant you chose after reading reviews on Yelp nearby the house you just rented on Airbnb? UberEats has become a go-to food delivery service. We collaborate with partners we hire via platforms like UpWork using Google Docs, and Amazon Fresh has transformed the entire grocery shop experience in our homes.

Each of the companies mentioned above is an integral component of the gig economy as we know it. The people affiliated with these companies represent an ever-increasing percentage of the global workforce. It is a landscape with numerous short-term positions, and contracts for temporary engagements.

The gig economy is a hot topic. It has allowed workers to escape from the confines of physical desks and provided people who possess specific skills to break free from the traditional 9-5 workday. With this new way of working comes certain advantages, such as driving economic growth throughout Africa, while simultaneously creating economic insecurity and undermine worker protections.

The term "gig" is borrowed from musicians and refers to a single, specific job, usually either a one-off or part of a short-term project. For musicians, a gig is a live performance. For web developers, a gig might be to redesign a website or to migrate from one content management system (CMS) to another.

According to Investopedia, in the gig economy:

"Large numbers of people work part-time or temporary positions. The result of a gig economy is cheaper, more efficient services, such as Uber or Airbnb, for those willing to use them."

"There is a wide range of positions that fall into the category of a gig. For example, adjunct and part-time professors have contracted employees as opposed to tenured or tenure-track professors."

An Introduction to Freelancing

While new technologies are making the gig economy much more accessible, it's far from a new trend. Indeed, it has its origins in the Middle Ages and the roots of its growth stem back to the start of the 20th century. Let's jump on in and take a look at the history of the gig economy.

The very first freelancers were mercenaries (and for those who are fans of "Game of Thrones," a bit like sellswords) – they were knights who'd fight for anyone who paid them. The only difference is that instead of "selling their swords," they had "free lances." These mercenaries were an essential resource for kings and other societal leaders when their forces were considered insufficient.

Fast forward to the 20th century, when the modern version of freelancing was born. It arguably began in the 1920s and 1930s amongst newspaper reporters, who'd pitch articles to different publications and make a living as a writer for hire. The next major step was the rise of advertising agencies in the 1950s and 1960s, which introduced companies to the idea of retainers and working on a project-by-project basis with an external resource.

By the end of the 20th-century, the concept of modern freelancing was manifest by creative employees and consultants with specialized skills. These specialists were able to charge companies a premium for their expertise. This coincided with the growth and global adoption of the World Wide Web and the shift towards diversification.

Reasons Why Businesses Invest in the Gig Economy

Mobility and mobile computing are changing everything. One of the key factors driving the gig economy's growth is mobility and the mobile technology that facilitates remote productivity. Amid digital economy development, freelancing provides businesses with additional flexibility in terms of talent management and acquisition, enabling remote workers to work anytime, from anywhere (on a global scale).

With the help of smartphones or laptops, people can get more work done on the move compared to sitting in a cubicle all day and waiting for instructions. It doesn't matter whether someone is a blogger, a business consultant, web developer, or a YouTuber - everyone can now work and run a business on their terms.

Freelancing and the gig economy are two different things, and this brings us back to the definition of "gigs." The relationship between freelancing and gigs is like the relationship between email and the Internet, in that they're related but not identical. Gigs are usually short-term, and freelancers make their living from performing multiple gigs.

The modern gig economy was born in the early 21st century and powered by an accompanying shift in the way in which we do work. Large numbers of people found themselves in creative roles that could be effectively performed over the Internet from anywhere in the world.

That's when websites dedicated to freelancing started to pop up, ranging from low-end providers (like Fiverr, where gigs start at $5) to specialist sites (like DevelopersForHire.com). At the same time, platforms like Uber, Lyft, and Airbnb provided a new way for people to make money from gigs. The gig economy was no longer just for freelancers – it had been opened up to the general public.

Providing Value for The Gen Z and Millennials

Baby boomers worked in an environment in which they had, or believed they had job security. For all "post Baby Boomers," job security is, unfortunately, far from guaranteed and is no longer the main objective.

More than 50% of millennials believe their work productivity is higher when working out of the office. Younger generations prioritize work-life balance as opposed to the "old-school" belief that what is needed is job stability and a steady paycheck. Generation Z and Millennials enjoy the flexibility and freedom that comes with mobility.

Thanks to global high-speed Internet access, along with the innovative payment methods combined with the "gig work" platforms, employers have the opportunity to find workers far beyond their geographical borders. This global marketplace of talent benefits everyone.

Everyone in the gig economy is simultaneously a worker and an entrepreneur. Up to 70% of people globally work remotely at least once per week. The gig economy is here to save the world. It represents one of the most significant economic shifts we have ever experienced.

There was a time when success was optimized by about finding a corporate job and staying there for years, climbing the "corporate ladder" hoping to get a promotion and to retire with a pension. Today, being a successful freelancer in the gig economy is considered a much more significant achievement. Companies are looking for the types of creative professionals with the resilience and problem-solving skills required to survive within this new economic reality.

"Gig Economy" has become a recognized term, and large numbers of people are making their livings from the rapidly expanding Gig Economy. Individuals can now conduct business online, from anywhere, which further reinforces the value of the Gig Economy. As employers quickly embrace the economic benefits of this new economic model, more opportunities are generated for everyone. Slowly but surely, bridges between traditional ways of doing business and this freelance economy are built. As the economy continues to transform, the Gig Economy will be both financially and socially transformative.

In the next installment of this series, we'll move on to the present day before taking a look at what the future has in store for the gig economy.